“It is far better to perform one’s prescribed duties, even though faultily, than another’s duties perfectly. Destruction in the course of performing one’s own duty is better than engaging in another’s duties, to follow another’s path is dangerous.”

The great Hindu epic Bhagavad Gita is adorned with numerous such quotes, lessons, and teachings for life. The quotes written in it are almost 5000-6000 years old but are still relevant to today’s world situations. They give us the direction and meaning to perform our duties in this mortal world. Based on these lessons, I have composed this book which depicts the relevance of everything that was advised to Arjuna by Lord Krishna during the great Mahabharata war.

No doubt, India produces the world’s greatest history and the richest culture ever, produced by any society. But over the passage of time, this culture has been diminished to lower standards due to the ruthless and selfish motives of today’s rulers, the immoral attitude of today’s youth, and the insincerity towards nature. Therefore, to present a practical approach for dealing with today’s political problems and adverse conditions, I have written a beautiful saga of how they could be tackled through the Bhagavad Gita. 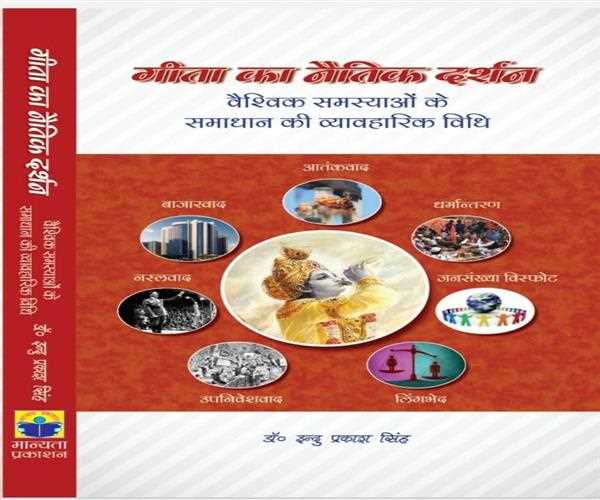 My book consists of methods deploy “Karma Yoga” in real life. As we witness that in today’s generation, the concept of brotherhood and righteousness is rarely seen. Thus, it is our duty as citizens to highlight the forgotten roots of truth which are dug deep in our culture. The book shows the manner in which social welfare or Loksangraha is possible if we assimilate the Bhagavad Gita in our hearts.

It presents an insight into the Gita to perceive it morally and get the practical solutions to all the global problems of the modern world. The modern-day problems which dominate the globe are terrorism, the humiliation of women and minorities, Naxalism, population explosion, religious conversion, adverse globalization, colonialism, economic and religious conflicts. My efforts in the book are to provide practical solutions to every problem through Gita’s welfare dynamics.

It is divided into two sections both of which revolve around the ways in which Gita could be used for social, cultural, and economic welfare. The first section depicts how the Gita Philosophy could essentially be used for welfare. Also, it shows what is the meaning behind Lord Krishna’s philosophy of Karma Yoga. Whereas, the second section consists of the methods in which the modern-day problems could be tackled by the Gita.

The inspiration behind writing it is mainly to produce a unique approach to Gita in front of the readers and motivate them to develop a thinking ability. It could be read by any person who desires to understand the behavioral ideology of the Bhagavad Gita. For this purpose, it is available on the platforms of Amazon and Flipkart. It is highly beneficial for the politicians, students preparing for competitive examinations (IAS, PCS), the future torch-bearers of philosophy, the students of subjects like sociology, philosophy, economics, and the common people as well.

I believe that there is no meaning in doing anything if it doesn’t involve the paradigm of righteousness, ethical and moral values in it. That’s why this book could be read by an army commander who motivates his soldiers to fight for the country, as well as by a teacher who explains the aim of education to his students. There is no limit to the audience of this book.

“There is hardly any living being in the mortal world who can sustain his life without performing any activity or Karma. Because everyone is bound by nature’s laws to perform his/her duties.”

I have pursued P.G. Diploma as my educational qualification in Journalism and Mass Communication. Also, I’ve been awarded the degree of D.Phil in Philosophy by the University of Allahabad for my work in 'A Critical Study of Geeta's Ideal of Lokasangraha and its relevance in contemporary social and political thought'. This gave me the motivation to drive more energy in prospering the values of Bhagavad Gita into my subject Philosophy.

On the professional front, I’m a Group-A Gazetted officer of the U.P. government in the education sector. I’m currently serving as the Assistant Professor at H.N.B Government PG College, Naini, Prayagraj. I possess 19 year-long teaching and research experience in the Philosophical domain.

Being involved in the field of education, I’ve been distributing my knowledge of Philosophy to the upcoming generations. I’m delighted to be present in this profession as my ultimate aim is to produce positive minds in society who would be torch-bearers of ethics and righteousness. My experience in research is conclusive and inspirational.

My efforts will be reflected in all my upcoming publications. I will not stop delivering my thoughts in the form of writing until the problems in the world are not reduced. I promise to produce practical solutions to these problems so that our ancient culture spreads across the globe, enlightening young minds. Through my books, I will provide the basis of socialism, democracy, equal rights to women, and other methods to tackle global problems.

Without the involvement of values and ethics, every mission is like an unguided missile in the world. Thus, together we need to find solutions to assimilate morality in our life.

Currently involved in the teaching occupation, I have a great zeal and enthusiasm to follow a wholesome life of happiness and sustenance. With my great skill of writing and philosophical attitude towards things, I can lead the way of today's generation towards positivity, optimism, and ethical values.