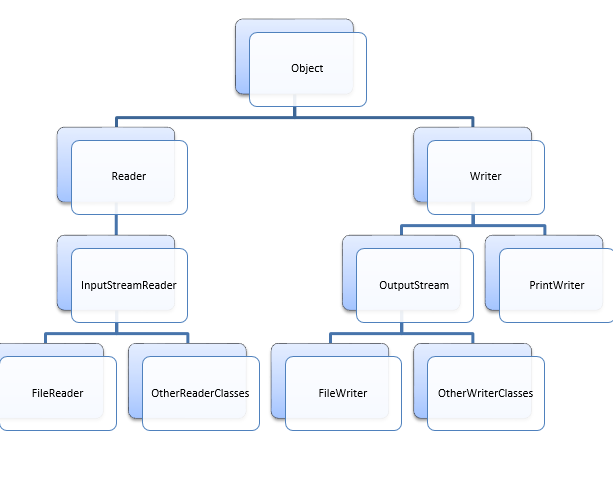 The Reader and Writer classes act as super classes for the rest of the classes in this category. Several Reader/Writer subclasses are available that match the corresponding byte stream classes in functionality, except they work on character streams rather than byte streams.

Java provides the BufferedReader and BufferedWriter classes, which provide the in-built buffers. Remember that reading a single byte or 512 bytes at a time requires the same amount of I/O processing. Therefore, buffering characters makes file reading and writing more efficient.

When we use these classes, we may specify the size for the buffer; otherwise, a default size is used that is adequate for most purposes. If we have a lot of system memory, we may allocate a larger buffer to provide data caching so as to avoid frequent reads and writes from and to a physical disk.

Typically, we would construct an instance of the BufferedReader class as follows:

Similar to the BufferedReader class, Java provides a BufferedWriter class for efficient writing to the files. We construct an instance of BufferedWriter as follows: