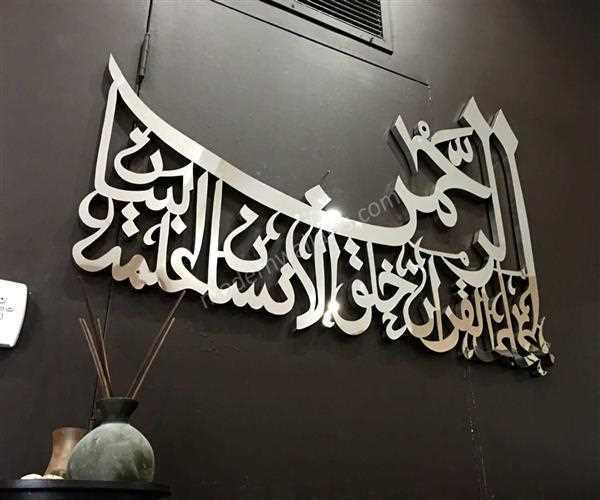 Are you looking for Arabic calligraphy of the Quranic verse ‘Fabi Ayyi Ala-i-Rabbikuma Tukazzibaan’? This well-known ayat from the Holy Quran is translated in English as “So which of the favors of your Lord will you deny?”. You can try searching for “Surah Al Rahman wall art” or “Surah Al Rahman wall frame” on the Internet too in case you are looking for the calligraphy of the verse.

The poetic and sublime chapter is themed on Revelation, Allah’s Favours and the Hereafter, its 78 verses interspersed with the verse ‘Fabi Ayyi Ala-i-Rabbikuma Tukazzibaan’ 31 times. The verse underscores the theme of the chapter. In his detailed and much-referenced commentary of the Glorious Quran, Abdullah Yusuf Ali writes: “The rhyme in most cases is in the dual grammatical form, and the argument implies that though things are created in pairs, there is an underlying Unity, through the Creator, in the favors which He bestows, and in the goal to which they are marching.”

The Word of Allah, the Quran, is one of Allah’s greatest favors upon humankind. “His creation is in pairs, well-balanced; all created things receive His favors, but they will pass away, and only Allah will endure through the ages,” writes Ali in his exegesis.

The chapter ends with saying that all evil and good shall go back to their respective destinations. But Allah’s Name is ever-blessed – the Lord of Honour, Glory, and Bounty – as explained by Abdullah Yusuf Ali.

‘Fabi Ayyi Aala’i Rabbikuma tukazzibaan’ (‘So which of the favors of your Lord will you deny?’) appears after the first 12 ayahs of the surah. ‘Will you deny’ means failure or refusal to acknowledge Allah’s favors upon us – reflected in our speech, thoughts or deeds. The ayat also implies misusing or ignoring Allah Almighty’s blessings – a reflection of ingratitude, denial or refusal to benefit from Divine Mercy and Grace.

The art of Arabic calligraphy, the inspiration for which is largely verses and chapters from the Glorious Quran, is a visual, artistic expression of spirituality for a believer in his or her residence or office. Arabic calligraphy is among the most beautiful forms of art, which has no parallel. It forms an important part of Islamic art and architecture.

So, if you display in your home or office or restaurant Surah Al Rahman wall art like a Surah Al Rahman wall frame or stickers, the calligraphic artwork would not just be an artistic expression of your beliefs, it can also be a powerful spiritual reminder to the self, family members and visiting guests. You can also give this kind of artwork as a gift to a loved one– a close pal, a distant relative, or someone you really care for and think about.