Difference between ViewData, ViewBag and TempData 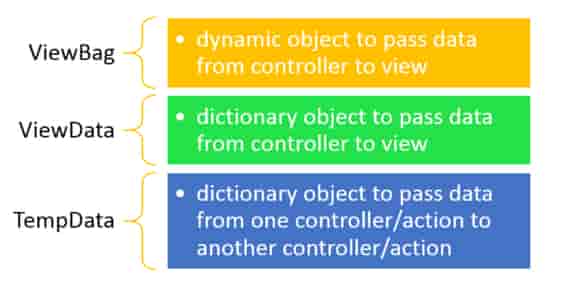 ViewData and ViewBag both of these options are limited to a single server call. That means meant its value will be null if a redirect occurs. But TempData is used to maintain state from one Controller to another in redirect case. In this case TempData is the other available option.

ViewData requires typecasting as well as null checks As compared to ViewBag. TempData is primarily a dictionary object derived from TempDataDictionary. Its remaining for a successive HTTP Request as opposed to ViewBag and ViewData those stay only for ongoing request. So we say that its can be used to maintain data between controller actions as well as redirects.
Modified On Mar-28-2020 05:44:12 AM