‘Li-Fi’ stands for “Light Fidelity”. Li-Fi is a wireless Optical Network Technology which uses LEDs (Light Emitting Diodes) for the transfer of data. It is a system which runs over Wireless Communication that travels at a very high speed.

In Li-Fi the light bulbs or LEDs work as the router. It works over using common household LED lights to enable the transfer of data at a very high speed of up to 224 GB per second. The technology is very efficient and more secure than any other Wireless Technologies. Li-Fi is quite like Wi-Fi but during its testing phase, Li-Fi reaches the speed of more than 100 times to the Wi-Fi. This makes it more apt and demandable in the near future. Like Wi-Fi, Li-Fi is also a Bi-Directional Wireless Communication Technology.

The Li-Fi technology uses normal light from LED light bulbs with specially fitted chips, whereas, Wi-Fi works over Radio Waves to transfer data. Like Wi-Fi, Li-Fi is wireless and uses 802.11 protocol which is similar to Wi-Fi, whereas it uses Ultraviolet, Infrared, and Radio Waves, all these waves have much bigger Bandwidth.

The concept of Li-Fi was first introduced by “Harald Has” in Edinburg, during a TED Global Talk in 2011. He is the co-founder of Li-Fi technology with Dr. Mostafa Afgani. The technology is now been actively developed by several organizations across the globe. 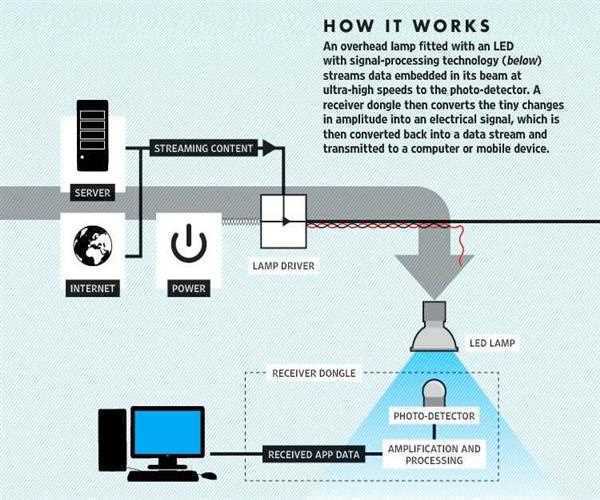 The transfer of data through Li-Fi technology is by modulating the intensity of light. Like dimming the light or turning the light On and Off at a very high speed. The changes occur in this process are so fast that it becomes nearly impossible for a human eye to catch the changes. For example, The data is sent to the LED Light Bulb with the Signal Processing Technology, after that it sends data attached to its beam, at a high speed to the Photo-detector or Photo-Diode.

The light is then received by the Photo-Sensor Detector and then converted into electronic form. After that, it is again converted back into a data-stream, which make it usable for the user to watch Videos, Audios, and perform other Internet-related tasks. 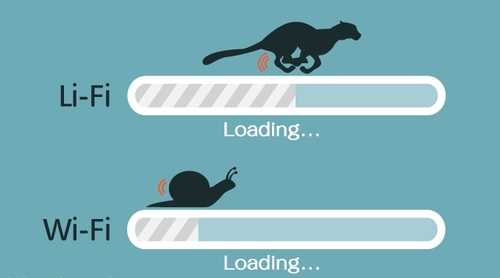 1. Security: In the Wi-Fi network, the Radio Waves can penetrate the walls, but the light cannot cross over or penetrates the wall and door. This feature of data transmission makes it more secure and easy to control access to a network.

2. Underwater: Maximally the Remotely Operated Underwater Vehicles (ROV) is operated by wired connections. It makes difficult to operate and reach a large area with wire connectivity. This restricts the underwater work, whereas, the light can travel a distance in water. So, the Li-Fi connectivity can allow good communication and easy mobility.

3. Hospitals: Nowadays, the treatment or during operations the various things are needed to be managed simultaneously. So, the Li-Fi system will be a better system to transfer information about the patient at a real-time. As well as, the light waves have less effect on medical instruments and the patient too.

4. Vehicles: Through Li-Fi System vehicles could communicate with the front and back light which improves the safety on road. The Traffic Signals and Streetlights also provide current situation information on the roads.

5. Industrial Automation: Industries require transferring data and establishing a permanent communication channel. Here, Li-Fi can replace Slip rings, Sliding Contacts, and Short Cables. As the Li-Fi system works over Real-Time, it could be a good alternative for industries to adopt Li-Fi over Wi-Fi. 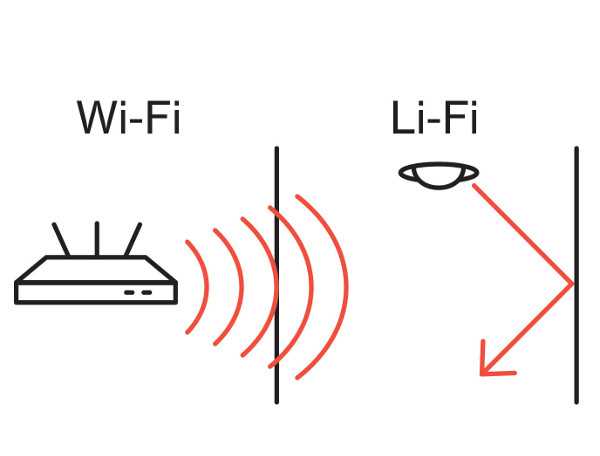 1. Much High Speed than Wi-Fi.

3. It is much secured than Wi-Fi, as the data cannot be accessed in between without a clear sight.

5. Eliminates any disturbances from the other neighboring network.

6. Unrestricted by any interference from the Radio Waves.

7. It even does not disturb any sensitive electronic device.

8. Li-Fi is better to use for a healthy environment like in Hospitals, as well as the sensitive environment for the Aircraft.

1. It requires a clear line of sight to transfer data without any disturbance.

2. The mobility of data will be difficult because it requires light to stay on for operations.

3. It covers a short range as the light cannot cross the wall or doors.

4. The Li-Fi LEDs need to be kept on in order to transmit the data.