Android Moves Ahead Of Windows Phone Now As Most Popular OS!!!

We had already done a comparison between IOS and Windows Phone10 OS, but Google’s Android is also a part of the race and doing very well in gaining its popularity.

Somewhere, we knew that this had already happened, but it comes that Google's Android has just overtaken Windows as the internet's most popular operating system.

That's according to web analytics firm “StatCounter”, which on Monday released a statistics report marking the "milestone in technology history and end of an era" with Microsoft no longer owning the dominant OS and exist up from Android when you look at internet usage across desktop and mobile devices all together.

With Android a mobile OS, the news is just another reminder of the superiority of portable mobile devices for Internet in our lives. StatCounter found that in March, Android grabbed a 37.93 percent share of the worldwide OS internet market, barely overtaking Microsoft Windows' 37.91 percent share for the first time. Go through the trend lines in the chart below: 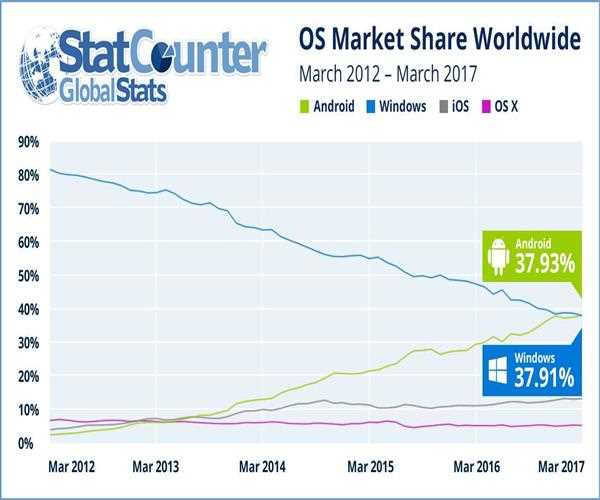 Windows is on a steady walk down from 82 percent in 2012, while Android is moving upsky from 2.2 percent in the same period of five-year.

This is not only the growth of smartphones worldwide, which give more people access to the internet, but also a decline in sales of traditional PCs and other machines.

A Microsoft representative declined to comment specifically on Android taking over Windows, but stated: "We are pleased that there are more than 400 million monthly active devices running on Windows 10, and most importantly, that Windows 10 has the highest levels of product satisfaction over any previous version of Windows."