Home / DeveloperSection / Blogs / Are we going to live with Robots in the future? 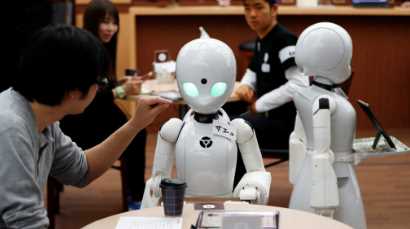 Are we going to live with Robots in the future?

As technology continues to advance at a rapid pace, the idea of living with robots in the future is becoming more and more realistic. While the concept of robots coexisting with humans may seem like something out of a science fiction movie, it is a reality that we may soon be facing. In this blog post, we will explore the possibilities of living with robots in the future and the implications it may have on our society.

One of the most obvious ways that robots will impact our lives in the future is through their integration into the workforce. With the increasing use of automation and artificial intelligence, robots are already being used to perform tasks that were once done by humans. This trend is likely to continue, with more and more jobs being taken over by robots in the future. While this may lead to some job losses, it could also lead to increased efficiency and productivity in certain industries.

Another way that robots may impact our lives in the future is through their use in various industries such as healthcare, transportation, and manufacturing. In the healthcare industry, robots could be used to assist doctors and nurses with tasks such as patient monitoring and administering medication. In transportation, self-driving cars and drones could make travel safer and more efficient. In manufacturing, robots could be used to perform tasks such as welding and assembly, leading to increased efficiency and precision.

Changes in the Future

The integration of robots into our homes is another area where we may see significant changes in the future. Already, we have seen the development of home assistants such as Amazon Alexa and Google Home. These devices allow us to control our homes with voice commands and can perform tasks such as turning lights on and off, adjusting the thermostat, and even ordering groceries. In the future, we may see even more advanced robots that can perform tasks such as cleaning and cooking. This could have a significant impact on our daily lives, making our homes more efficient and freeing up our time for other activities.

However, there are also potential negative consequences to living with robots in the future. One of the biggest concerns is the potential loss of jobs as robots take over tasks that were once done by humans. This could lead to increased unemployment and social unrest. Additionally, there are concerns about the implications of robots on privacy and security. As robots become more integrated into our lives, they will have access to a vast amount of personal data, raising concerns about data privacy and security.

Furthermore, there are ethical considerations to be taken into account. As robots become more advanced, the line between what is considered a machine and what is considered a living being will become blurred. This raises questions about the rights and responsibilities of robots and how they should be treated.

In conclusion, the idea of living with robots in the future is both exciting and daunting. While robots have the potential to make our lives more efficient and productive, there are also potential negative consequences that must be taken into consideration. As we continue to develop and integrate robots into our society, it is important that we consider the ethical and societal implications of these advancements and work to mitigate any negative consequences.