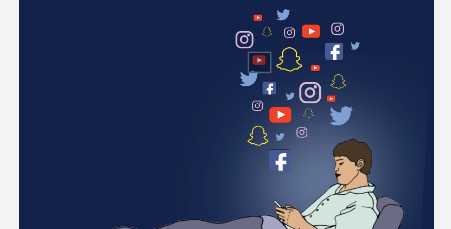 What Is Addiction to Social Media?

The last ten years have seen a rise in the popularity of checking and browsing through social media. A minority percentage of users develop an addiction to social networking sites and use them excessively or compulsively, even if the majority of people's use of social media is not harmful. In reality, according to psychologists, 5 to 10% of Americans currently fulfill the criteria for social media addiction. The term 'social media addiction' refers to a behavioral addiction characterized by an excessive concern with social media, an uncontrollable want to access or use social media, and the expenditure of so much time and effort on social media that it interferes with other important elements of one's life.

Social media is addicting on a physical and psychological level because of the impact it has on the brain. Self-disclosure on social networking sites activates the same region of the brain as using addictive drugs, according to a recent Harvard University study. Decisions and emotions are influenced by the brain's reward region and the chemical messengers it uses. Dopamine levels increase when someone engages in rewarding behavior or consumes an addictive substance because dopamine neurons in the main brain regions responsible for generating dopamine are engaged. As a result, the medication or action is associated with positive reinforcement and the brain receives a 'reward.'

An Addiction To Social Media: How To Spot It

Despite the fact that many individuals use social media on a regular basis, very few are actually addicted. Ask the following 6 questions to see if someone is at risk of becoming addicted to social media:

If you checked off more than three of them, you may be addicted to social media.

A digital detox, which is a period of time in which a person dramatically cuts back on the amount of time they spend using electronic devices like smartphones or laptops, can be a good precaution. This can be done by taking small actions like turning off sound notifications and simply checking social media sites once every hour. Other adjustments could include setting aside time during the day for self-imposed screen-free activities, such as during mealtimes, or putting the phone away from the bed at night so as not to disrupt rest. As a result, social engagement in the real world can once again be the main focus, and reliance on social networking sites is decreased.