iPhone introduced its first-ever smartphone in 2007, namely iPhone 2g. It was the first iPhone which was officially marketed & designed by the Apple Inc. It was first released in the United States than later on in other parts of the world UK, Germany, France, Austria, Ireland, and many more countries. Below, I have shared an image highlighting the release of the iPhone over the years in different countries. 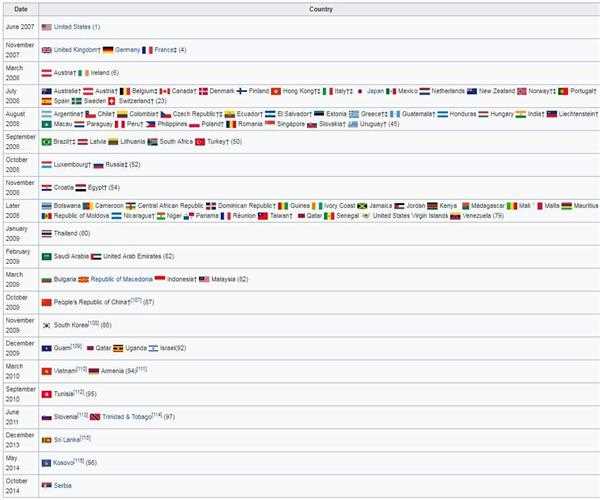 In this blog post, I'll be going to throw some light on important facts which make the iPhone as a dominant contender in terms of smartphone sales.

Unfortunately, Apple back in November 2018, announces to stop reporting sales figure. But till Nov 1, 2018, approx 2.2 billion units of iPhone have been sold. And most of the iPhone units have been sold in countries likewise the United States, the United Kingdom where the per capita income is generally high as compared to developing countries.

As per the StatCounter Global Stats report, iOS continues to dominate in countries such as the United States, Canada, and Australia.

Now if you compare geographical areas of these countries, then you will notice that more than 52% of world geographical area is covered up by the United States, Canada, Australia and rest 48% by remaining countries in the world.

If I talk about iPhone performance over the Android smartphone, then there is no match. iPhone beats the Android in terms of performance. I have used Samsung S8 (Android-based), currently using iPhone X. I have faced a lot more hang issues in Samsung S8 as compared to iPhone X. App frequently crashes, faster battery drainage, heating issues and many more. Even 5th generation iPhone (5, 5s, 5C) operates well as compared to crapy Samsung S8.

Even though Android-based devices offer you personalization options, but when it comes to features, iPhone beats Android. If you talk about Siri, then it has no match with the Google Assistant & Cortana (Windows).

In terms of overall build quality, Apple never comprises like Android devices. If you look at Chinese smartphones likewise Oppo, Vivo, Xiaomi then you will notice cheap plastic used which gets hot quickly, a moderate battery which explodes very frequently. I guess you're thinking that I'm insulting Android phones. Okay, let me ask you one simple question.

How many numbers of time, you have heard an iPhone is exploding because of battery or heating issues?

You can search for the same question on Google & truth will come in front of you.

On the main reason for the iPhone, sales are regular software updates over time. If you see iPhone 5s (launched back in 2013), the same phone is running on iOS current version software 12.3. Any user before buying smartphone thinks that he/she would get software updates at least for next 2 - 3 years.

iPhone uses iOS as its primary OS, whereas other smartphone devices use Android as its primary OS. Developing an app for iOS takes less time because it requires less coding compared to Android. So because of the same reason, iOS app releases first & Android app later on.

Through this short blog post, I have tried to cover up primary points which make the iPhone as a clear winner over the Android. I have used both OS systems and came to the same conclusion after 3 - 4 years of usage of both smartphones.

I'm not saying that I'm 100% accurate. Maybe you would have some different opinion. So, I'm looking forward to your views & suggestions.

Sr. iOS App Developer with more than 5+ years of experience. I'm a keen learner and possess excellence in mobile technologies. Till date, I have contributed to many publications with my in-depth knowledge and hands-on experience.