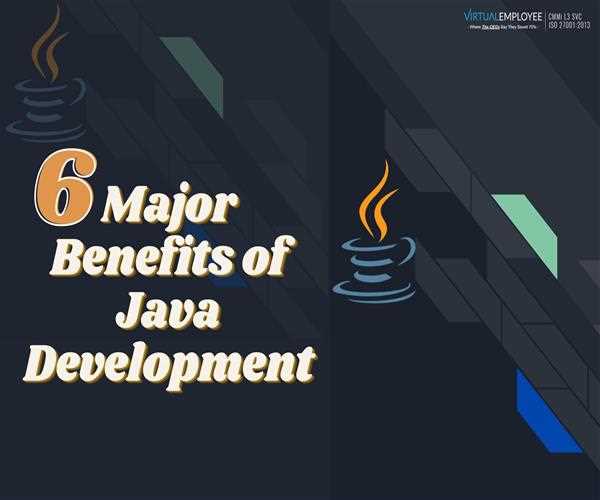 Java is a highly popular and widely used programming language that is used for developing different types of applications, right from mobile apps to even enterprise servers as well as supercomputers.

Both novices as well as pros agree to Java being the ultimate choice as far as app development is concerned. Today Java developers are available in hordes, the reason being students today are getting early exposure to this programming language as it's part of the curriculum of many a university.

Meanwhile, the 6 Benefits of Java Development are as follows:

1. Open Source: Java is open source and provides you with a very flexible and customized environment to develop applications as per your requirement. While users do not have to pay a plum licensing fee annually, developers too do not require proprietary rights to gain access to the codes of this programming language. OpenJDK (Open Java Development Kit) is an open-source implementation of the Java programming language. OpenJDK is the result of an effort Sun Microsystems began in 2006.

2. Platform Independent: The applications one writes in Java are not dependent on any platform, be it at the source or the binary level. Therefore, you can execute them from anywhere. Java gives you the liberty to run a program from more than one system. This really matters in the case of the software and apps designed for the internet. The goal of platform-independent is that the java compiled code can run on all operating systems. A program is written in a human-readable language. It may include words, phrases, etc which the device does not recognize. For the source code to be understood by the machine, it requires to be in a language understood by devices, typically a machine-level language.

4. Easy To Learn: Java was introduced with the aim to provide developers with a programming language that they could learn easily. So, not only is it easy to learn, writing, compiling, and debugging Java too is not that difficult.

5. Object-Oriented: Java is object-oriented and allows programmers to come up with modular programs and use a Java code again and again. So, instead of writing the same code repeatedly, developers can focus more on the logical part. Object-oriented programming has many advantages over procedural programming:

6. Distributed Computing: With the networking feature that it is provided with, Java makes distributed computing easy to use and more feasible. In fact, it is so simple that creating programs for networking is akin to sending as well receiving info from a file. Distributed programming enables developers to manage multiple nodes in a data center to improve throughput and/or decrease the latency of selected applications.

Right, so now if you have become interested in Java development, you can think of outsourcing Java development to one of the many companies in India that have offshore java programmers working for them and hire a dedicated Java developer for yourself.

John Tie is working as a Digital Marketer and content strategist with Virtual Employee, virtual employment agency, offering affordable and scalable remote staffing solutions for mainly Small and Medium Businesses (SMEs) around the world in over 150 domains. He is a versatile tech writer and loves exploring the latest technology trends, entrepreneur and startup column.