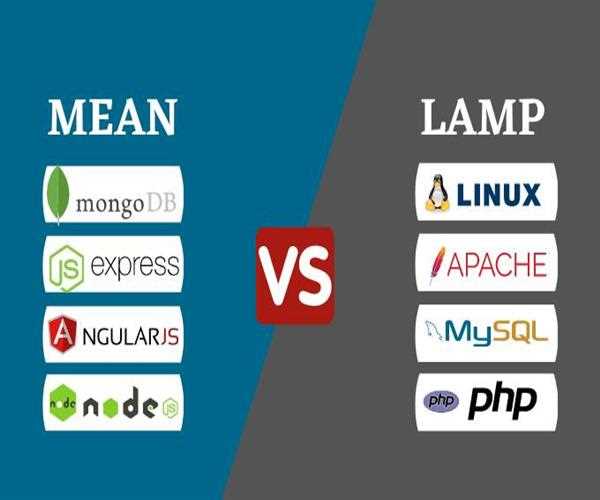 MEAN Vs LAMP Stack – Everything That You Need To Know

In the modern world, there are many different technologies that are used to deliver content over the web. If you own a business with any kind of online presence, you have probably heard of some of these technologies. Words like Apache, PHP, or Node.js may have crossed your path when you first launched your website, but you might not have a solid grasp of what these terms mean.

Indeed, it can be challenging to develop a thorough understanding of each of these technologies on its own, which is part of the reason why the technology world decided to group them into "stacks," each made up of software components that are commonly used together. Two of the most popular technology stacks used today are called LAMP and MEAN, and while they may appear to do the same thing on the surface, they are actually very different under the hood, and both of them have advantages over the other.

What is LAMP Stack?

LAMP is an acronym for Linux, Apache, MySQL, and PHP.

Linux- Linux is a popular open-source operating system that is developed and maintained by a non-profit foundation with the goal of providing a competent and free software platform to everyone who wants it.

Apache- Apache is a web server software that first appeared in the 1990s and has been steadily growing in popularity ever since.

MySQL- MySQL is tried-and-true database software that has seen usage from businesses and other organizations every since it first appeared in the 1980s, and is generally considered more reliable than other databases of its kind.

PHP- PHP is a popular web programming language that combines HTML with more traditional elements of programming, such as variables and function. It is often said that PHP powers the modern web!

One of the pros of the LAMP stack is that it's older than most of the other commonly used technology stacks, and is generally considered more reliable. The age might also be one of the cons of the LAMP stack, as it is made up of technologies that were popular in the 1990s and might not have certain features that are common in modern back-end web development.

What is MEAN Stack?

MEAN is an acronym for MongoDB, ExpressJS, AngularJS, and Node.js.

MongoDB- MongoDB is a relatively new database software compared to MySQL that has gained popularity in recent years due to its ease of use.

ExpressJS- It is server software that is written in the JavaScript programming language, with the intention of making it easy for developers to write server-side code.

AngularJS- AngularJS is a popular front-end web framework designed to reduce the amount of server-side processing that a website requires by serving data to users in a standardized format that can be assembled in the web browser.

Node.js- Node.js is a runtime environment designed for running javascript on the server. This has been beneficial to developers, as JavaScript is a very popular scripting language that is known by far more developers than other popular server-side languages, like Ruby or Java.

Pros and Cons of MEAN Stack

One of the major pros of the MEAN stack is that all of its technologies use JavaScript in one or more ways. both AngularJS and ExpressJS were built on top of JavaScript, which can also be used to query a MongoDB database and run on the server thanks to Node.js.

Another huge pro of MEAN stack development is that it can be used for creating mobile apps. One of the cons of the MEAN stack is that the technologies comprising it are less mature than those found in the LAMP stack, so MEAN might be more prone to error in comparison.

The two technology stacks discussed in this article have a handful of similarities. They are both used to serve content on the web, and both are made up of front and back-end technologies.

Key Differences Between MEAN and LAMP

In summary, the two software stacks have five key differences:

1. LAMP serves web pages and other content to the user with the help of PHP, while MEAN leverages the user’s web browser to render content using JavaScript, which puts less strain on the server.

2. LAMP presupposes the use of Linux, which is where it gets the ‘L’ in its name, and while MEAN is often used alongside a Linux-based operating system, it does not necessarily have to be. (In case you were wondering, WAMP is the Windows equivalent to the LAMP stack.)

4. LAMP is made up of older, more reliable tech that has been in use since at least the 1990s, while MEAN is significantly more modern and prone to error.

5. When it comes to mobile app development, a MEAN stack developer would have an easier time getting work done compared to a LAMP developer.

The similarities and differences between the LAMP and MEAN stacks are quite an interesting subject to explore. If you are looking to hire a web developer to get your website up and running with reliable uptime, you might want to look into people who specialize in the LAMP stack. However, if you are looking to hire a mobile app developer, you might want to find someone who knows the MEAN stack instead!

Follow
My name Saurabh and I am working as a Content Strategist at JumpGrowth a Dallas-based Mobile App Development Company. As a tech enthusiast, I enjoy writing about technology, marketing, and industry trends and love to explore new things.