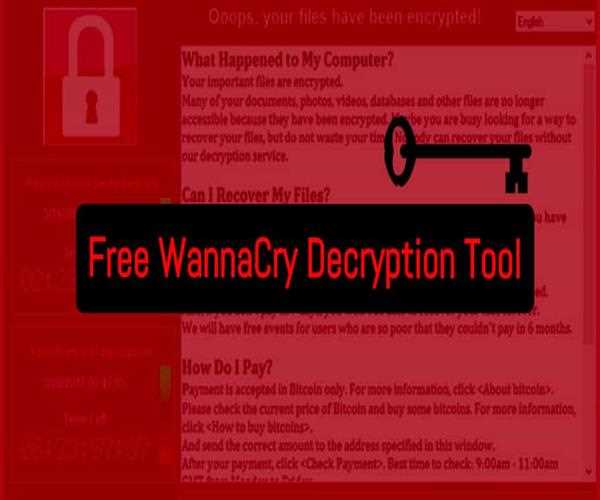 A free WannaCry decryption tool can be used to save data on computers infected by the ransomware and it is available on Github.

There’s a possible solution at hand, for those who have got encrypted their computers by the WannaCry ransomware. Now, you don’t need to pay $300 in Bitcoins to cyber criminals, as a new decryption tool is released by a French security research, if your system was previously affected by WannaCry ransomware.

According to reports, the computer networks in over 150 countries including Britain, Spain, Japan, Indonesia, Taiwanwere affected with the Ransomware cyberattack. This is widely seen as one of the biggest cyberattack in the world, as more than 300,000 computers in the world got affected.

Adrien Guinet, a French security researcher from Quarkslab has discovered a way to retrieve the secret encryption keys used by WannaCry ransomware. WannaCry ransomware based on prime numbers and generates a “public” key and a “private” key for encryption and decryption of the system files, according to Guinet.

In his research, he also came to know that it does not delete the prime numbers from memory before freeing the attached memory, and therefore he was able to create WannaKey, basically tries to retrieve the two prime numbers used in the formula to generate encryption keys is found an effective WannaCry ransomware decryption tool.

The WannaKey decryption tool is available for free and works on Windows XP, Windows 7, Windows Vista, Windows Server 2003 and 2008 operating systems. Guinet added,  but the limitation in using the tool is that it will only work on those affected computer that haven’t been rebooted after the attack or for computers with associated memory that hasn’t been allocated and erased by user or by some other process.

Reportedly, there is still one more way to unlock your computer without paying. There’s another tool named “WanaKiwi” by a security researcher named Benjamin Delpy that can unlock WannaCry infected systems, as reported by the hacker news.

The WanaKiwi tool works on Windows XP, Windows 7, Windows Vista, Windows Server 2003 and 2008 operating systems like the WannaKey, and can run using the command prompt. It is said have to been developed on Guinet’s findings and is available to download from Github.

Also Read: Cybersecurity Company claims for Another large-scale cyberattack on the way