A comparison of cloud tools: Google for Work vs. Microsoft Office 365

While many similar services are offered by Google for Work and Microsoft Office 365, there can be a significant challenge for CIOs in choosing between the two. This comparison lessens that burden.

When CIOs and IT managers want cloud-based productivity tools for email, documents, calendar and file-sharing, they have many choices. However, the first two options that come into mind for most, are Google Apps for Work and Office 365.

The Google Apps packs all the familiarities of the Google Apps suite, which includes Gmail, Hangouts, Drive and Calendar, while the latter one comes with the longer legacy of tried-and-trusted Microsoft Office apps, such as Word, Excel, Outlook and PowerPoint. Both of them have their own unique strengths and weaknesses, and each one is best-suited for particular types of users and businesses.

Google for Work vs. Microsoft Office 365: Price, simplicity and storage

Both provides the each month’s initial services in $5. Microsoft for its enterprise plans needs a full-year commitment, while Google's entire suite is available on a monthly basis. A yearly discounted plan for $5 plus tax is also offered by Google for a year.

Google's entry-level plan provides 30GB of online storage per user that is considerably less space while Microsoft provides at least 1TB of cloud storage to every Office 365 user. However, Google provides unlimited storage for accounts with at least five users on its $10 a month or $120 per year (plus tax) plans.

Microsoft with six total packages makes things a bit more confusing— three for small and medium-size businesses and three for large enterprises — that comes with a yearly commitment, range in price between $5 to $20 a month.

Pricing is a major factor for determining, but the feature sets, security safeguards and user experiences of both platforms are equally important for CIOs. The perfect cloud-based platform must be simple for employees to learn and use, secure and stable. Cost is just among one of the number of terms that IT managers must look out before investing in cloud-based productivity platforms..

Eric Schlissel, CEO of IT consultancy GeekTek IT Services, says his company uses Google for Work, but more often than not he recommends Office 365 to clients because they are already heavily dependent and invested in Microsoft Outlook. According to Schlissel, many business owners are reluctant to change the way their offices work.

Schlissel says "We tend to recommend Google for Work to clients with a younger and more tech-savvy workforce and CIOs should look at how their employees use technology and work outwards from there."

Here is a table showing difference between the two. 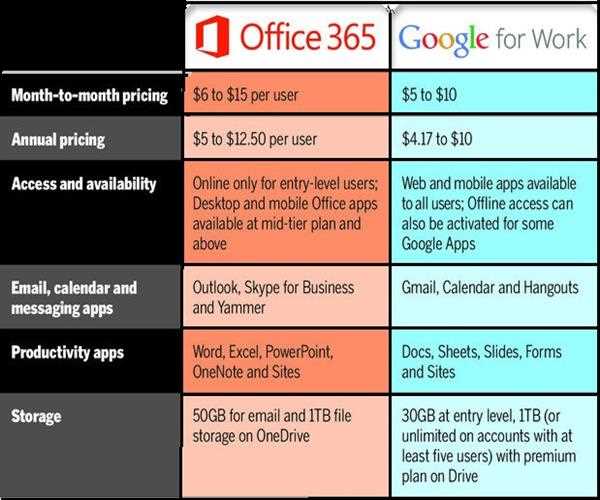 Where Google for Work falls short

At Creative Solutions in Healthcare, a company that owns and operates assisted-living facilities, Google for Work is only used by the IT department while the rest of the company relies on Office 365, according to CIO Shawn Wiora.

Wiora says "In many ways, Google for Work is a low-cost compared of Office 365, and it's a good choice for startups and small businesses that have a limited costs while achieving 'good enough' status, the cost cutting come with a number of variation, that limit its fit for enterprise customers, however."

Wiora says with Google for Work there are at least four problems that can add up to a major burden for businesses. He states "shared calendar issues, an inability to transfer Excel formulas directly into Google Spreadsheets, compatibility issues and vertical-specific decisions like Google's past refusal to sign a HIPAA BAA [Health Insurance Portability and Accountability Act Business Associate] agreement for the healthcare industry."

Google's suite keeps up with Office 365 with around 90 percent of the features. It's that the rest 10 percent that "makes Google for Work a poor substitute for medium and large enterprises that expect to simply pick up in Google where they leave off with Microsoft." That’s what Wiora's experience tell.

According to Tim Burke, BetterCloud's IT director, BetterCloud, a company that provides security and management services for Google Apps and Office 365, also uses both Google and Microsoft's offers for his company.

The company also provides Office 365 accounts to users who work on its Microsoft-related products but primarily uses Google for Work as the sole platform for its corporate calendar and conference room reservation system.

Burke says "We've looked into many solutions for existence of both platforms simultaneously, mainly for calendar and contacts, but there's nothing perfect yet available that allows Google Apps and Office 365 to work ‘well together’ on a single domain."

Both platforms with almost identical offerings are enterprise class, Burke says Google's suite is getting more and more "enterprise" every day.

Office 365 provides a continuity with legacy solutions that makes it easier to keep everyone happy with the applications they've been using for many years, or perhaps decades, but it's also evolving. "Office 365 is based on Microsoft's legacy products and is becoming more 'cloud-enabled' and easy to manage," Burke says.

He says "Many people don't realize Google has been in this market for over six years at this point, and Google Apps is used by some of the largest organizations in the world," Google's strengths also include a deeply integrated infrastructure and a simple licensing structure.