H1B visa: It’s hard to recover in FY18 for IT investors 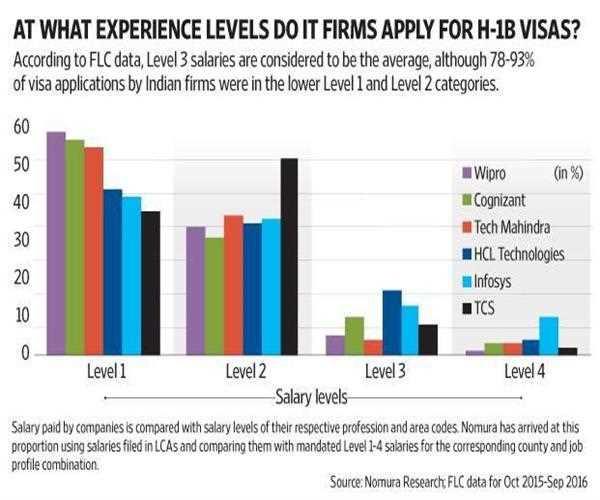 Indian IT companies have been saying that their visa applications have been reduced in past recent years, and more so in the low-experience categories.

After a slow for a couple of months, when the delivery against the H1B visa program had diminished, the US government has changed guidelines for visa applying and processing. The new guidelines now will increase costs for Indian information technology - IT companies and also are likely to create other barriers as well, which may hit growth in the coming fiscal year.

Looking in-depth into the policy memo issued by the US Citizenship and Immigration Services (USCIS) agency is that-- an entry-level computer programmer position would not generally qualify as a position in a “specialty occupation”.

Analysts at Nomura Research stated that, last year, approx. 40-60% of labor condition applications (LCAs) filed by Indian IT firms were in the entry-level or Level 1 category. LCA filings are a pre-requisite for H1B visa applications. Nomura’s findings are based on data provided by Foreign Labor Certification (FLC) Data Center for the period October 2015 till September 2016. The chart above gives the details of LCA filings by top IT outsourcing companies.

Also Read: Good or Bad  time for IT Companies

Indian IT companies have been saying that in recent years, their visa applications have reduced, and which are more in the low-level categories. But data till September 2016 shows otherwise. Possibly, companies made a shift in strategy from last year onwards.

But whether it was done from last year or will be starting this year, Indian IT firms would have to step up hiring of locals with respect to entry-level programmers. In the cases where the required person has more experience or skills, but was earlier categorized as Level 1, companies would have no choice but to use the Level 2 or a higher category from now onwards.

Nomura’s analysts said in a note to clients that In both cases, the costs will increase. Each level change results in a 20-25% raise in salaries, and this could have negative margin implications for Indian IT. With the hiring of locals, Indian companies will lose the flexibility of being able to call back an employee at the completion of a project. As such, utilization levels of its on-site employees will drop.

Most analysts had come to the decision that costs related to on-site services will rise as a result of the change in the government’s policy towards H1B visas. In that backdrop, the policy memo from USCIS doesn’t come as a huge surprise.

But also note that the US government had earlier decided to do away with premium processing of H1B visas for a period of up to six months. This can increase the time taken to process visa applications. Moreover, since Donald Trump took over as president, three bills have been introduced seeking to the use of H1B visas.

The recent policy amends as well as the possibility of further amendments can result in ambiguity among clients. Some of them may have concerns about the capability of their outsourcing associates to deliver projects on time, and might look to firms such as Accenture Plc or International Business Machines Corp., which are far less dependent on H1B visas. Some of them may even decide to insource some of their needs.

Nomura’s analysts states that, “We see the immigration tightening policy in the UK, the US and Singapore as negative for Indian IT, both from a margin and a near-term growth sutuation, given the uncertainty.”

Some analysts and investors have been seeing a growth of the industry to pick up this fiscal year. This is based on signs of a recovery in growth in the US as well as the fact that some of the headwinds the industry faced last year—such as an increase in outsourcing to captive units—have decreased this year. But thanks to the visa troubles, these hopes may be contradicted.

In fiscal year 2017, growth was dismal and was in single digits, and this year it is likely to be little different

Also Read: 10 things you must know about new H1B Visa