Home > DeveloperSection > Blogs > Why Android Features is Better Than others

Why Android Features is Better Than others

Android was founded by Andy Rubin, Rich miner, Nick sears and Chris White in 2003. Later Android was acquired by Google in 2005. Google has further developed Android Auto for cars, Android wear for wrist watches and Android TV for television. Android application has mainly designed for touchscreen mobile devices such as smartphone and tablets. Android UI (User Interface) is mainly based on direct manipulation such as tapping, pinching and swapping, to manipulate on-screen objects, along with a virtual keyboard for text input. Google offers its own services such as YouTube, Gmail, Search, Maps and many more. This means you can easily watch videos, write emails on your phone, search information on the web, search for directions, just as you do on your laptops. 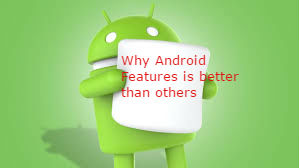 Android UI (User Interface) is mainly based on direct manipulation such as tapping, pinching and swapping, to manipulate on-screen objects, along with a virtual keyboard for text input. Game controller and physical keyboards are supported via USB or Bluetooth. Internal hardware, such as gyroscope, proximity sensors and accelerometer are used by some of the applications to respond user action such as allowing the user to steer a vehicle in a racing game, simulating control of a steering wheel, adjusting the screen from landscape to portrait or portrait to landscape depending on how the device is oriented.

Android devices are battery-powered, Android OS is designed to manage processes to keep power consumption at a minimum. So, when an application is not in use the system halts its operation so that it does not use CPU resources or battery consumption. Android also manages the applications stored in memory automatically: when memory is low, the system will begin automatically closing inactive processes, starting with those that have been inactive for longest.

On May 2016, Google announced Daydream, a virtual reality platform that relies on a phones and provides VR capabilities using virtual reality headset and controller designed by Google itself. The software is available for developers and will be released later in 2016.

Voice-based features has been available since initial release. Voice actions for texting, navigation, calling, etc. are supported on Android 2.2 onwards. From Android 4.1 version, Google has enlarged Voice Actions with ability to talk back.

Android has real support for which was earlier made available in handsets.

Android supports screenshot by pressing the power and home-screen buttons at the same time. Earlier to Android 4.0, the only methods of capturing a screenshot were through third-party customizations (apps) and manufacturer, or otherwise by using a PC connection.