The fact that cross-platform apps regularly take the upper hand over native apps suddenly increases the demand for cross-platform app developers in the market. But the central question remains the same, how much does it cost to hire a qualified developer?

Why are cross-platform apps creating a new trend and causing a sudden boom in the mobile app development industry?

The potential reasons for the growing demand for cross-platform applications are:

Greater Market Reach: With cross-platform apps, you can cover the large user base available on Apple's App Store and Google Play Store. You can develop an app that can run on both iPhone and Android, which gives you the advantage of having access to a large pool of potential users.

Easy Marketing: Customer behavior is different on different platforms, and promoting your brand across multiple platforms with a single marketing strategy is quite intimidating. Since iPhone users tend to have higher purchasing power than Android users, you should look for a marketing strategy that targets a specific set of people. And the cross-platform app offers the freedom to promote various media resources and allows you to appeal to a more extensive section of the potential user base.

Reduce application development costs: By leveraging a single code base, developers can develop an application for both native platforms without hiring two dedicated development teams.

Codes are cheaper to maintain: Since cross-platform applications are developed with a single codebase, the development team must make changes and updates in a single codebase. The final changes will be automatically reflected in all applications without spending extra effort and time on code maintenance.

Availability of better plugins: The integration of third-party plugins increases the application's functionality and speeds up the process of mobile application development. And all major cross-platform app development frameworks like Flutter, Cordova, React Native, Ionic are open source technologies that provide a great source of plugins. As a result, developers can choose from various widgets and meet business demand by customizing the app using helpful plugin libraries.

But now you must be wondering why we are discussing the cost of hiring Flutter developers instead of React Native?

They are considering the graph below from the Statista survey report, showing the sharp increase in the percentage of Flutter developers from 30% in 2019 to 39% in 2020. On the other hand, React Native has a constant 42% developer percentage from 2019 to 2020. 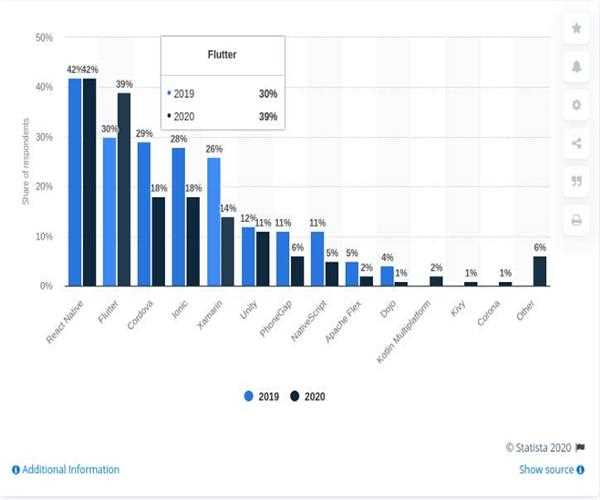 Overall, these statistics illustrate the growing popularity of Flutter from year to year. With that in mind, it's pretty safe to say that Flutter may outperform cutting-edge technologies and frameworks in the future.

How much does it cost to hire a Flutter app developer in 2021?

Flutter is an advanced open-source SDK owned and supported by Google. Although it was launched in May 2017, it has become the second preferred technology for developing a mobile application. In fact, with upgrades in Flutter often, startups and established businesses worldwide are requesting Flutter application development services.

The first question is, therefore, to know what type of business to choose and why?

But, to make it easier for you, be sure to follow these steps:

A company should allow you to have a detailed discussion with the Flutter app development team.

Since you are spending a considerable investment, make sure that the company can share the details of their previous Flutter app development project to help you determine the project's quality and customer satisfaction.

You should be able to hire a dev team or a flutter developer without any issues.

Make sure the company strictly follows the NDAs to avoid leaking your app idea to the market.

You need to get the most out of your Flutter mobile app development, so assess the balance between cost and project quality.

- Engaging model of the developer

To meet modern customer demands, Flutter app development companies typically offer you three types of attractive models: part-time, hourly, and full-time hiring. Then, depending on your specific business needs and project requirements, you can hire a team accordingly.

Each hiring method has its limitations and advantages; therefore, you can choose according to your end goals.

Part-time hiring model: If your project is relatively small and you plan to get it done in a short period, you may want to consider hiring part-time developers. The most important advantage is that they are not expensive as the business owner has to bear the cost of the work that has been done.

Hourly hiring: Hourly hires are recommended if you are eager to upgrade your existing app with the latest features or migrate your app to the modern platform.

Dedicated Recruitment Model: Outsourcing a true application development team is expected to remain an international trend for some time. According to the survey, it will continue to expand shortly. This type of recruiting model is suitable for businesses of any size.

Here is the estimated time, cost, and billing cycle for these models.

- Expertise and experience of the developer

Flutter is a recently released technology, but it has generated immense demand among companies for application development. Therefore, the need for a Flutter application developer is relatively high compared to the availability of skilled, experienced, and expert Flutter developers.

For example, the average salary for mid-level Flutters app developers in the United States is around $ 87,818. So a developer with a low or expert skill level will charge you accordingly. The final choice of hiring an application developer depends on the requirements of your project, the skill level or expertise of the programmer you want to hire for a project.

The cost of app developers varies by location as the cost of living is different in different locations. However, according to the survey, India is the destination of choice for companies looking to hire Flutter application developers from all over the world. 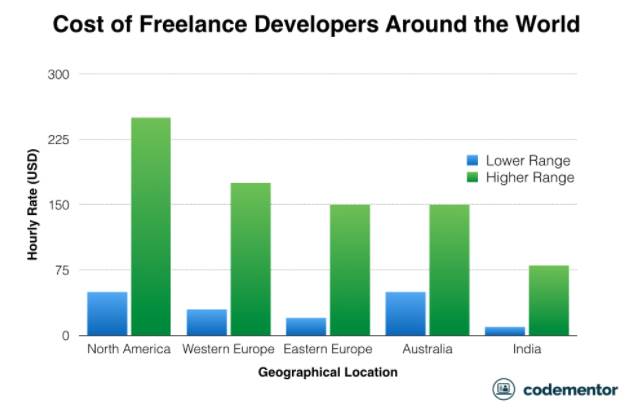 Since the final cost of developing the app varies greatly depending on the total time the expert spends on your project and their development cost per hour. On average, offshore mobile application developers will work five days or 40 hours per week; therefore, it can be calculated as 160 hours per month. So, let's talk about the developer hourly cost per location.

When it comes to hiring a Flutter app developer, two important concerns come to mind—the price and quality of the product, which are often affected by the project's complexity. In addition, the set of features that you choose to integrate into an application can make a significant difference in the cost of the final development of the application.

So here are the rough guidelines that give you an idea of ​​the cost of developing the Flutter app with different complexities: 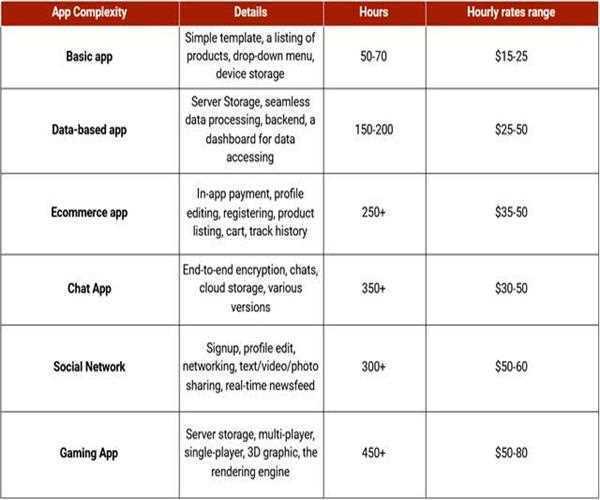 Some additional expenses that add to the cost

The most common apps are e-commerce apps that require a user to create an account and online food ordering apps that allow users to track and call drivers through an app.

Depending on your type of app, you need to decide who will be your target audience, and depending on that, choose where to launch your app - Apple App Store or Google Play Store.

However, by choosing Flutter mobile app developer, you can launch your app on both platforms and get a better market reach with just one app.

Why is choosing Flutter App Developer better than the rest?

There are many discussions and explanations available on the internet claiming that the choice of Flutter is worth taking over the others because;

Google's support: Being a baby of Google, and based on its internal programming language, Flutter is sure not to go away in the future. Instead, being supported by Google, Flutter can provide developers with the most advanced and up-to-date techniques that translate the most complex app development processes into straightforward procedures.

The Wide Choice of Widgets: Flutter gives you the wide choice of advanced SDK that allows developers to create a beautiful native user interface for the application.

What is the average cost of developing a Flutter application?

There is no simple answer to this question as the final cost of developing the Flutter app depends on various factors ranging from the complexity of the app to the location of the developers, the choice of the technology stack, to the idea of ​​application development. It is therefore impossible to answer this question with a single number.

However, with the detailed research and analysis of various studies, we have concluded that:

An app with basic functionality, like a nutrition and fitness app with meal plans, weight-loss strategies, personal profiles, weight dairy, workout suggestions, and more, will cost you around $ 10,000 to $ 12,000 +.

The costs of developing Flutter applications with a medium level of complexity, such as chat applications such as video messenger, photo and text sharing, video/voice calls, profile creation, and more, will cost you around $ 10,000 to $ 15,000 +.

Now, after reading this article, you should understand the important factors that contribute to the cost of hiring a Flutter app developer.

There is no standard cost for hiring developers of Flutter apps and Flutter-based apps. However, since each project has different requirements and needs experts with varying skill levels, the cost of app developers at no time will be the same.

So, to determine the cost of hiring a Flutter app developer, you need to:

Ketan Parmar is Digital Marketing Strategist at Weboccult Technologies, Implementing cutting edge online marketing strategies to help businesses strengthen their online presence is his forte. Apart from helping small and big businesses, he loves to jot down valuable resources for Entrepreneurs, Start-Ups, Technology Geeks with his knowledge and expertise of 10 years in the industry.