Control Valves are very important valves as industrial equipment. It has its smart mechanism that helps us to keep control over the fluid, pressure, temperature, etc. These valves are highly used in the gas industry, paint plants, Beverage plants, chemical industries, and many others where need to control the temperature, pressure, or fluid.

Different types of control valves are designed according to their use and type of media. The control valve has three major body parts, each of them has a specific important role in the process. 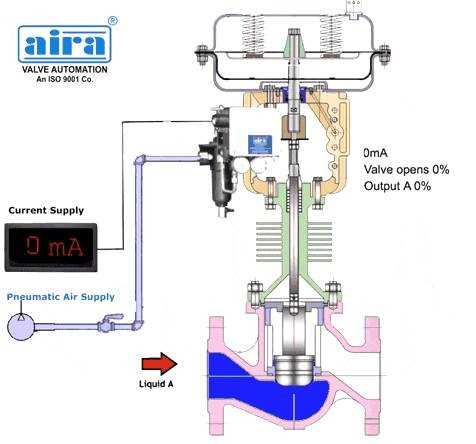 From down to up there is a Valve or valve body, inside of this body there is a valve plug that allows and stops the fluid. This valve plug is connected to the Shaft on the other end shaft connected to an actuator. End connections are also attached to this part.

In the middle, there is a positioner to check the current position of the valve. This positioner also closes and opens the valve as per the direction received from the control room. This also used to read the valve’s current status as the valve is partially closed, then how many percent it is.

At the top of the valve, there is an actuator. Actuators are operated by hydraulic, electric, or pneumatic. Inside the actuator, there is a diaphragm connected to the shaft. When the diaphragm lifts, the connected shaft also goes with it, and on the other end connected valve plug, open up the valve and allows the fluid to pass from.

The control valve is the most important control element in the control process industries. The control valve manipulates a flowing fluid such as gas, steam, water, or chemical compounds to compensate for the load disturbance and keep the regulated process variable as close as possible to the desired set point.

In the pneumatic air operated valve, there are two types of control actions are available:

The aira euro automation is a leading control valve manufacturer in India, they have many varieties in the control valve and they also welcomed the client’s designs and diagrams.