All of ancient Egyptian history is here, from the earliest Paranoiac artifact ever discovered to treasures from the era of Cleopatra, the last in a dynastic sequence of divine kings and queens stretching over three millennia. It is said that the museum displays more than 120,000 items, with at least that many again stored away out of sight in the basement. The real crowd-pleasers are the treasures from Tutankhamun’s tomb, but there are many hundreds of other precious antiquities here of at least equal significance and beauty. 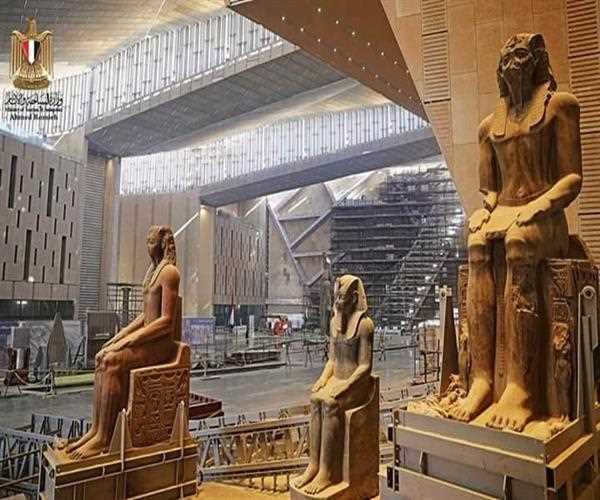 Egypt’s first national museum of antiquities opened in 1863. It was rehoused in the current pink, purpose-built premises in 1902, which were designed in Neo-Classical style by French architect Marcel Dourgnon.

The Egyptologist Mariette, who discovered the Serapeum at Saqqara (see p40), was the founder of the first national museum of antiquities in Egypt. His sarcophagus rests in the garden in front of the Egyptian Museum.

The museum is on two floors. On the lower floor galleries are arranged in chronological order clockwise around a central hall dedicated to large statuary; this is also where you will find the Narmer Palette

Immediately to the left of the entrance hall, these galleries contain artifacts from the era of the Pyramid builders. Particularly beautiful are three slate triads each depicting Menkaure, builder of the smallest of the Giza pyramids, flanked by two goddesses

This long gallery is devoted to the mightiest pharaohs, including Tuthmosis III, Amenhotep II, and Ramses II, during whose rules Egypt expanded its borders south into what is now Sudan and north to the Euphrates.

Room 3 contains pieces from Amarna, the short-lived capital of the “heretic king” Akhenaten. His daughter, Princess Meritaten, is characterized by an elongated face and full lips.

Almost half of the upper floor is devoted to some of the vast numbers of items excavated from the tomb of Egypt’s famed boy-king (left), which range from everyday items such as gaming sets and footstools to the giant gilded shrines and sarcophagi that fit one inside the other like Russian dolls.

The desiccated bodies of some of Egypt’s mightiest rulers are displayed in two rooms on the upper floor of the museum. Of the eleven royals present, the most famous is Seti I and his son Ramses II, whose colossi adorn a great many monuments in Upper Egypt.

The ancient Egyptians mummified animals as well as people. This room on the upper floor of the museum is full of animal mummies, from cats, mice and fish to crocodiles, sacred to the god Sobek.

These two rooms contain dazzling examples of royal jewelry from the New Kingdom period (left). Many of these items were discovered in 1939 at Tanis, an ancient site in the Delta region.