It was only last decade the Indian roads were brimmed with commuter-centric motorcycles. There wasn’t a day I would go to college and couldn’t exactly come across a dozen – and I wasn’t even counting – of Hero Splendor(s). Back then, only the purists had the opportunity to fiddle around with high-tech and exceedingly fast motorcycles.

But times have changed, and for the better, as the small-time enthusiasts have the option to opt for a tremendous number of performance-packed motorcycles in a segment that only comprised commuters last decade. Let me explain how. 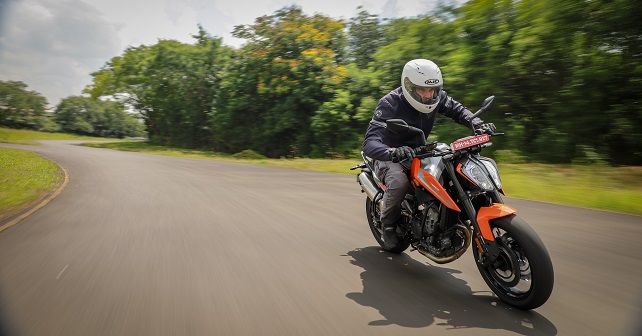 KTM entered the market with the locally-produced 390 Duke in 2012. With an affordable price tag, the Duke soon became the go-to performance offering. The Duke was brimmed with power, agility, performance, and thrill in its wake. Therefore, it became an instant success among enthusiasts in the country. But since 2012, the 390 remained to be the flagship product from the Austrian bikemaker. So, after years of anticipation, KTM launched the 790 Duke in India. We got our hands on the new KTM at Bajaj’s test facility in Chakan. Here’s a lowdown from our KTM 790 Duke review.

There’s a familiarity to the KTM 790 Duke that many cult followers will appreciate. But, in my opinion, the 790 doesn’t look too appealing for a segment that goes straight against the beautiful Italian machines. It still comes in an orange shade, which certainly makes it stand out at first, but most of the audience – if not all – will probably mistake it for the 390.

The headlamp still sports the sharp diamond design, just like its smaller siblings. The whole body is sharp, narrow and slim. The quality of switchgear is modest for the segment, as it’s evident in the controls. But nit-picking aside, the 790 does sport some smart elements like a new exhaust pipe, wheels, and frame. 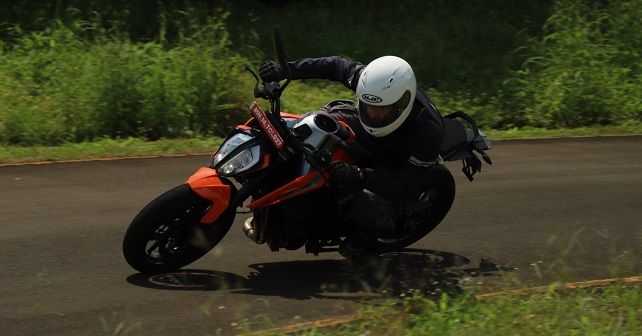 Sure, it might be a bit shabby on turning those heads, but the 790 Duke is an absolute bonkers riding machine. It becomes more evident as soon as you open the brochure and look for the electronics. It gets ABS, cornering ABS, a slipper clutch, wheelie control, launch control, different levels of traction control, and a quick shifter. The instrument cluster is also tech-laden as it sports a coloured TFT display for all the rider-centric information. It also gets four riding modes – Road, Rain, Sport and Track – which allows the rider to adjust the ABS, traction control, throttle response and power delivery. Then there’s the nifty connectivity features, which, in a nutshell, allows the rider to pair their smartphone to the cluster via Bluetooth connectivity and explore a number of small features.

But given the opportunity to push it around a test track, it was time we shifted our focus to the way it rides. But let’s talk numbers first. You see, the KTM 790 Duke is powered by a 799cc parallel-twin engine – the first parallel-twin for KTM – that’s good for 105bhp and 87Nm of torque. But the real party piece of the 790 Duke is just 168kgs of dry weight. The engine is mated to a six-speed transmission, with short gear ratios.

Thumb the starter, and the engine comes to life with a nice growl. The low-end is phenomenal, especially evident in Sport and Track mode. The mid-range is meaty, and the engine revs to the redline in an enthusiastically quick manner. The throttle response is quick, so it’s better to accelerate a bit slow if you’re a novice rider.

KTM calls the 790 Duke the ‘Scalpel’ because of its sharp and precise handling. And it really cuts through corners as if the tyres were built on a Scalpel. The light kerb weight ensures the bike is extremely easy to handle, as only a light effort is required to change the direction.

What makes the KTM more fun are the 43mm WP front forks and a WP shock at the rear. This combined with the low dry kerb of the motorcycle makes it an absolute delight to push around the bends and twisties.

So, should you get it? Before I answer that, it must be told that the middle-weight naked segment is already packed with a number of exceedingly quick motorcycles. Sure, nothing comes close to the KTM when it comes to the cutting-edge technology and phenomenal handling, but there are bikes that cost less and are more inclined towards value-for-money proposition. But if you’re a KTM fan – and yes, you admire the orange-ness of this KTM – this one isn’t going to disappoint. To read our full KTM 790 Duke review, tune in to autoX.