Language-Integrated Query (LINQ) is a set of features introduced that extends powerful query capabilities to the language syntax of C#. LINQ introduces standard, easily-learned patterns for querying and updating data, and the technology can be extended to support potentially any kind of data store. Visual Studio includes LINQ provider assemblies that enable the use of LINQ with .NET Framework collections, SQL Server databases, ADO.NET Datasets, and XML documents.

In a LINQ query, we have first priority to obtaining a data source. In C#, as another programming language are follow a culture that, before using variables, we have define first. In a LINQ query, the from clause comes first in order to introduce the data source (Student) and the range variable (stud).

This is the most common query operation is to apply a filter in the form of a Boolean expression. The filter those records that satisfy the given conditions. The result is produced by using the where clause.. In the following example, we have try to find only those Student who have a Last Name in Mishra are returned.

We can use the familiar C# logical AND and OR operators to apply as many filter expressions as necessary in the where clause. For example, to return only those student where city is Delhi from “Student” table  AND whose name is "Anupam" we would write the following code:

Here, we have sorting data in an ascending or descending order. The orderby clause will cause the elements in the returned sequence to be sorted according to the default comparer for the type being sorted. For example, the following query can be extended to sort the results based on the student name property. Because student name is a string, the default comparer performs an alphabetical sort from A to Z.

The group clause enables to group our results based on a key that we specify. For example we could specify that the results should be grouped by the City so that all students from Noida or Delhi are in individual groups. In this case, stud.City is the key.

Join operations create associations between sequences that are not explicitly modeled in the data sources. For example we can perform a join to find all the students and instructors who have the same location. In LINQ the join clause always works against object collections instead of database tables directly. 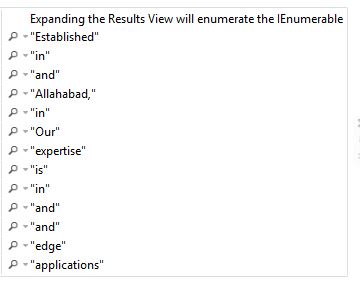 Thanks Anupam for providing very nice information about language-integrated query.